You are here: Home / About Us

The Week End Club was formed in 1922 by a group of Priest River ladies. According to the January 1923 minutes, “Mrs. McEwan suggested buying books with the idea of starting a library. Mrs. Parson suggested that each of us give a book.” And so began the discussion of how best to go about providing library service to the public.

By November 1925 a committee was formed to find a place to house the ladies’ dream, and in short order an offer was made by Paul Mears. The Priest River Library opened on January 16, 1926 in the balcony of the general store in the Mears Building, which currently houses the Artisan Gallery. After outgrowing this space and moving twice, the club purchased a building for $15 and moved it to the Congregational Church property.

During the next few years, the library enjoyed immense popularity, receiving cash donations from friends and the Village council. The 30’s brought hard times, with the library closing during a scarlet fever epidemic. In 1932 the bank closed and the club’s treasury of $60 was lost. According to The History of the Priest River Library by Mrs. G.G. Blair, “As was the case all over the country, not much money was in circulation, but hard work, optimism, and faith that after the storm comes calm, and that ultimate good would prevail. The spirit of the club was never daunted.” By 1937, the club’s name was changed to The Library Club and the group was offered a room in the new Priest River City Hall. Volunteers continued to raise funds and man the library. They purchased and refinished an old card catalog, and proceeded to catalog the collection.

The library continued to operate through the next five decades with the ladies taking turns hosting meetings at their homes. Committees were appointed to purchase, catalog and mend books, and members each took a turn as Librarian.

In August 1986 the library moved again, this time across the hall and into the much larger auditorium. Discussion turned to the benefits of becoming a public library and in October 1987 the City Council chose Connie Salesky to become the first paid librarian. The library officially became the Priest River Public Library, with over three hundred library cards issued.

The 90’s brought change. Kathy Spitz was hired to direct the library and the idea of expansion was a hot topic. In 1997 efforts to form a tax supported library district that would serve western Bonner County were thwarted by a narrow margin, which resulted in the formation of the Friends of the Priest River Library with the mission of promoting and advocating for the library. In 1998 present director Katie Crill was hired.

The first decade of the new century brought even more change. Focusing on a smaller area, the library went back to the voters in November 2000 and formation of the West Bonner Library District passed with 78% approval.

In 2001, Dr. Charley Falter donated the Priest River Medical Clinic property. The Friends of the Library set about remodeling. New walls, plumbing and wiring were installed. This enormous job was done using no tax dollars. Grants were written, fundraisers were held and time and materials were donated. The community turned out in force, forming a human chain to pass books from City Hall to the new facility. The West Bonner Library District, Priest River Branch opened its doors on June 11, 2002. It soon became evident that more space was needed, and by 2003, a meeting room was added. The next year, the Friends of the Library decided the library property needed attention and the piles of rubble from burned buildings, trash and noxious weeds were removed and replaced with an inviting landscaped lawn.

2003 also brought the annexation of Oldtown and Blanchard into the library district, providing library service to all Bonner County residents. Planning began for the Blanchard Branch Library, which opened in February 2005.

The library closed out the decade by joining the Cooperative Information Network, giving library patrons more than four million items to choose from that would be delivered via a weekly courier or delivered electronically.

At present, the library continues to thrive, with more than 3200 library cards issued, 60,000 visits annually, a collection of 32,000 items, high speed internet and 18 computers for public use. Regular programs are provided for kids, young adults and adults.

Download free, eBooks, audiobooks  and music to your device.

Log in to your Amazon account through this link and .5% of your purchase will be donated to the Friends of the Library.

Join the friends and help your library be the best that it can be! 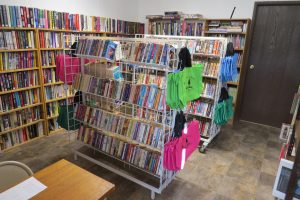 Books Out Back
Open Fridays and Saturdays 10-1